Find a store near you 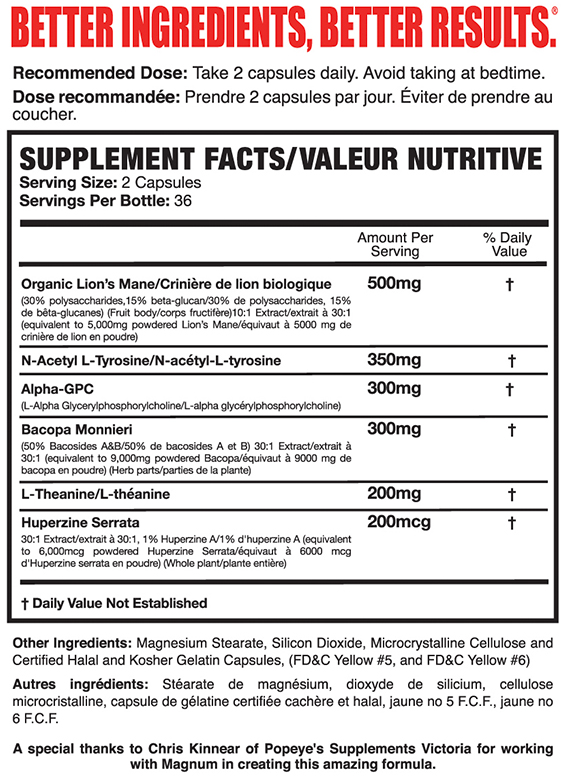 500mg Organic Lion’s Mane (30% polysaccharides, 15% beta-glucan) 10:1 Extract (equivalent to 5,000mg powdered Lion’s Mane) for Neuron Growth Lion’s Mane mushroom is an ancient Chinese medicine that has powerful nootropic benefits because of its link to Nerve Growth Factor (NGF). NGF is a neurotrophin, a small secreted protein that is essential for the growth and survival of neurons. One of the primary building blocks of brain health and neuroplasticity, NGF encourages the growth of axons, the long threadlike nerve cell extensions along which impulses are conducted. The more healthy axons that exist, the more rapidly and efficiently impulses can be transmitted and the better the cognition and overall brain function. NGF also promotes myelination, the development of the lipid/protein sheath that encases and protects axons. Lion’s Mane Extract is particularly effective when taken with a choline source like Alpha GPC to enable the production of ample acetylcholine for enhanced cognition.

350mg NALT (N-Acetyl L-Tyrosine) for Focus NALT is a modified form of the amino acid L-Tyrosine that has better absorption and increased bioavailability. After it’s absorbed, NALT is converted into the chemical L-Dopa, which is a precursor for a number of important brain chemicals associated with cognition. One of the most important of those is the neurotransmitter dopamine, which is closely associated with memory, mental clarity/focus, and mood. NALT potentiates the action of other nootropics as well, making it an ideal ingredient for improved memory formation and retrieval, increased learning capacity and attention span, and enhanced mood by reducing stress and anxiety.

300mg Alpha GPC (L-Alpha Glycerylphosphorylcholine) for a Clear Mind Alpha GPC is an excellent source of high-quality choline, which is crucial to cognitive function. Choline is the precursor of the neurotransmitter acetylcholine, the brain chemical most closely associated with learning. By supplementing with Alpha GPC you have an immediate increase in acetylcholine ready to enhance neuroplasticity, resulting in better cognitive function and memory. 300mg Bacopa monnieri (50% Bacosides A&B) 30:1 Extract (equivalent to 3,000mg powdered Bacopa) for Long-Lasting Memory Enhancement Bacopa monnieri is a known memory enhancer that has been clinically proven to make learning faster and easier by improving synaptic communication. It has also been shown to relieve anxiety and reduce negative effects of stress by modulating the activity of specific neurotransmitter receptors, including those that regulate the uptake of serotonin, which is strongly associated with mood and anxiety management.

200mg L-Theanine for a Relaxed, Alert Mind L-Theanine is an amino acid that naturally occurs in green tea and is essential to efficient brain function. L-Theanine has been shown to relax the brain without creating drowsiness, and clinical trials indicate that it has a marked positive effect on the general state of mental alertness.

200mcg Huperzine Serrata 30:1 Extract 1% (Huperzine A) (equivalent to 6,000mcg powdered Huperzine Serrata) for an Immediate Brain Boost Huperzine A is a natural plant extract that improves cognitive ability by acting as an acetylcholinesterase inhibitor. By preventing the release of a chemical that degrades and breaks down acetylcholine, the “learning neurotransmitter,” Huperzine A has the effect of increasing acetylcholine in the brain and that in turn enhances learning, memory, concentration, and focus. It is also believed to act as a neural protectant. It’s known to be quite fast acting, crossing the blood brain barrier in as little as 15 minutes and peaking in the system within an hour. Its fast-acting effects make it ideal for situations like exams, study sessions, and high-intensity workouts, when an immediate increase in cognitive ability is needed.

Pavel Z.
Bring back the energy! Great replacement for coffee but with coffee you get extra energy. No jitters like with pre-workout supplements.
Kevin M.
Love this product , usually take while fasting in the mornings by splitting the recommended dose of two ( 2) tablets taking one upon waking , and the other in the usual lull period in the afternoon. Second using it and really enjoy a heightened energy , alertness and focus . I’m an actor which comes with the territory to have all these facets in check . Thank you to Magnum

Added to your cart: